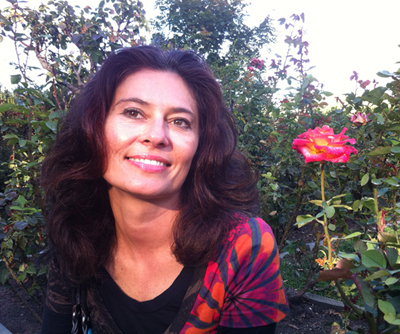 Inna Timokhina is an artist-scientist with Siberian roots, who spent her formative years in New York City.

Painting has been Inna Timokhina’s passion since childhood in Siberia, Russia, where she received formal education in visual arts at the Novosibirsk Center for the Arts. It was her ambition to become an artist; however, growing up in a family of scientists and being surrounded by scientists in an academic township had a major influence on her as well, and finally she decided to pursue studies in biology and genetics, leading to a Ph.D. in molecular biology at Cornell University in New York City.  Inna's artistic passion has now re-emerged and she is able to balance both scientific and artistic careers.  Throughout Inna’s scientific career as a biomedical scientist, she was fascinated with microscopic images and techniques for revealing the hidden energies and secrets of living cells, which had a major influence on her artistic ideas and visual language.  Based on her artistic and scientific backgrounds and an early influence of Japanese ink paintings, Inna has developed a unique approach that incorporates nature’s energy into phantasmagoric dreamworld images, expressed in layers of rare botanical inks, wax,  aquarelle and acrylics on paper or canvas.